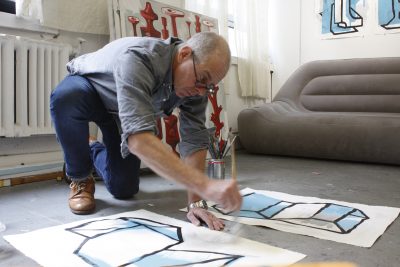 Robert Egert began his career in the postmodern East Village and Soho in the 80s. Then he was in the middle of the Brooklyn phenomenon in the 90s. He took a master’s degree in Marxist studies at the storied CUNY grad center under Marshall Berman, a right of passage of many thinkers and readers at that time.

And so even though there is a synthetic quality to his organic forms, there is also an analytic quality that comes through from a fascination with history, power, the construction of knowledge. Somewhere between language and life form, Egert paints entities as discrete symbols, carefully conjoined with their negative spaces.

They are erudite and pithy, and yet not cynical or ironic. Actually they are affirmative and sincere. They hold out an ephemeral optimism against a disembodied modernity that they nonetheless acknowledge. Simply, the possibility of new aesthetic life against considerable odds. They remind me of the marks that a philosopher might make who has forsaken writing, but whose pictograms still contain the powder of the battlefield.

2014
Diorama; Installation at The Rockland Center for the Arts, West Nyack, NY

1988
Holly Solomon Gallery, New York, NY
57th between A and B, group exhibition